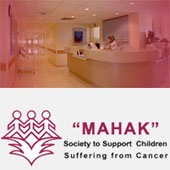 About two decades ago a mother who had experienced having a child with cancer and had witnessed first hand the difficulties faced by her child, pledged to set up a center that would act as a refuge for children and their families in a similar situation.

The Society to Support Children Suffering from Cancer, known as MAHAK, began its activities in 1991 as a non governmental, non-profit organization. In less than two decades, with the backing of public trust and support and with the application of the latest scientific and medical techniques, MAHAK has reached an inspiring level of support of children with cancer, achieving its goal of the reduction of the mortality rate, as well as a continuous increase in the number of completed treatment cases.

MAHAK’s statistics shows the completion of treatment of 35% of children in the year 2008. During a 17 year period the organization has managed to support over 13000 children.

As for the organizational standards, a major achievement of MAHAK was gaining the Society Generale de Surveillance (SGS) Verified Certificate of NGO Benchmarking in November 2007. The Society was the first non-governmental organization in the Middle East to do so.

The award is only given to NGOs which meet the highest international standards in the nine areas of: Board of Trustees, Strategies, Honest Management, Communications, Human Resources, Allocation and Control of the Financial Resources, Executive operations, Operational Results and Continuity of Improvement.

Member of the Board

Sorry, no records were found. Please adjust your search criteria and try again.